The Mineral Resources team conducted a two-year project in Northeast Tanacross, in the Tanacross D-1 and parts of D-2, C-1, and C-2 quadrangles. The area is located about 15 miles southeast of Chicken, Alaska, adjacent to the Alaska-Canada border. It contains the Pika, Fishhook, and Baggage mineral occurrences, described as 70-million-year-old, structurally controlled gold prospects, as well as current industry exploration projects at the Taurus and Bluff Cu-Mo-Au porphyry deposits and multiple placer operations on Liberty Creek.

The goal of our work in the Tanacross area is to gain a better understanding of the region's geology and mineral deposits through detailed geologic mapping. The data and reports from this project are meant to aid mineral exploration, government assessments of mineral potential, and the broader scientific understanding of the geology of interior Alaska.

This project is funded by the Alaska Legislature as part of the DGGS's Airborne Geophysical/Geological Mineral Inventory program, State of Alaska general funds and by U.S. Geological Survey FY2018 STATEMAP Award No. G18AS00006.

The Mineral Resources team completed two seasons of field work in the summers of 2017 and 2018. An overview of the findings from this summer, including a draft geologic map presented at the Alaska Miners Association convention in March, 2017, highlighted detailed geologic mapping of the Pika and Fishhook prospects and geochemical sampling of mineralized zones in the prospects, with one sample containing greater than 2 parts per million (ppm) gold. A geochemical assay report was published in November 2017. The final map resulting from this field work was published in 2019.

We plan to return this area during the 2018 field season to complete detailed geologic mapping. The work will be published as a single geologic map and report. 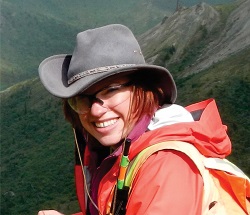