Alaska's coal resources make up about half of the United States coal-resource base and approximately one-sixth of the world coal-resource base. Alaska's total identified coal resources (all ranks) amount to more than 160 billion short tons, and hypothetical and speculative resources are as great as 5.5 trillion short tons. Most of Alaska's coals are bituminous, but there is a large secondary class of subbituminous coal and minor lignite and anthracite deposits. Coal deposits are found on the North Slope and in Cook Inlet basin, and in several interior basins, including the Susitna, Nenana, Minchumina, and Yukon Flats basins. Coal is also present in southeast Alaska. Alaska's only operating surface coal mine, the Usibelli mine, supplies about 1.2 million tons of coal per year. Despite Alaska's prominent coal resources, Alaska ranks 20th in US coal production, as most of its coal deposits remain unmined.

The Energy Resources Section contributes to the National Coal Resources Data System (NCRDS), a cooperative project between the U. S. Geological Survey and state geological surveys. The NCRDS is a national database of coal data, focusing on the stratigraphy and chemistry of coal. DGGS has been sampling coal seams for modern coal quality analyses to update information on Alaska's coal resources and characterize the coal as a primary fuel source.

DGGS is expanding its understanding of the liquid hydrocarbon source potential of Alaska's subsurface coal resources through the use of Rock-Eval pyrolysis. Through the integration of Rock-Eval pyrolysis, coal quality, and kerogen microscopy, a clearer picture of a basin's liquid hydrocarbon source potential will likely emerge. These data will be entered into the NCRDS and DGGS energy databases. DGGS is also collaborating with the U.S. Geological Survey to run hydrous pyrolysis experiments on selected coal seams by supplying high-quality samples for analysis.

Outcrop of the 50-foot-thick Capps coal seam south of Capps Glacier in the Tyonek Quadranlge, near the northwestern margin of Cook Inlet basin. The Capps coal is the thickest seam in the Tyonek Formation in outcrop. Photo credit: David L. LePain, DGGS. 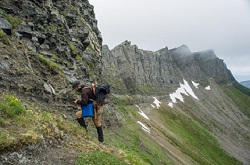