Cook Inlet basin is a prolific hydrocarbon province that hosts Alaska's first commercial oil discovery — Swanson River field, discovered in 1957. Since Swanson River, a total of nine additional oil fields and 34 gas fields have been discovered in the basin, with most discoveries occurring before 1985. Despite this history of exploration activity, the basin remains underexplored, relative to most basins in the Lower 48 states that support commercial petroleum production, and few data regarding its petroleum geology and remaining potential are publicly available. The Cook Inlet basin analysis program was initiated in 2006 in response to a lack of relevant data in the public domain and, importantly, in response to projected shortfalls in the natural gas production necessary to meet the commercial and residential energy needs of south-central Alaska.

The primary goal of the Cook Inlet program is to produce framework geologic information about hydrocarbon systems essential for attracting new exploration interest in the basin. The program focuses on detailed field-based studies of the sedimentology and stratigraphy of economically significant formations that are currently producing oil and gas (Cenozoic nonmarine strata) or have the potential to host commercial hydrocarbons (Mesozoic marine strata). This work includes detailed analyses of reservoir quality and characterization of oil and gas source rocks. An important aspect of the program is to understand how and when these strata were deformed to produce hydrocarbon trapping structures, conduits for fluid migration, and fracture porosity. Comprehensive outcrop studies are supplemented by inch-to-mile geologic mapping of lithologies exposed along the basin periphery that help place the stratigraphic and structural observations at individual outcrops into a basin-scale framework. These results are integrated, when possible, with the subsurface geology in prospective regions of the basin using available seismic, core, and wireline log data, in an effort to maximize value to industry.

View toward the southwest showing outcrops of the Middle Jurassic Red Glacier Formation at its type section north of Red Glacier. Organic-rich mudstones in this formation in the subsurface are thought to be the source for oil in upper Cook Inlet fields. Iliamna Volcano is visible in the upper right corner of the image. Photo credit: David L. LePain, DGGS. 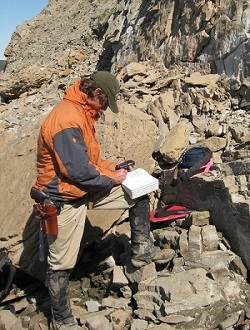