Alaska faces significant domestic energy challenges that threaten the economic well-being of the population and the state's economic future. Simply stated, the state has not identified adequate energy sources to serve its domestic needs at reasonable cost over the next few decades. The only way to mitigate these challenges is to look for local sources of energy that have the potential to supply more affordable energy for local consumption.

DGGS, in collaboration with the Alaska Division of Oil & Gas (DOG), has responded to these challenges by reviewing publicly available data on sedimentary basins throughout Alaska to identify basins whose geology suggests significant natural gas potential. The results of this review are available as Special Report 66. The Susitna and Nenana basins have been identified, on geological grounds, as having significant gas potential that could help meet in-state needs. Basin analysis projects are underway in each basin, aiming to better understand the possible presence of functioning petroleum systems. Helicopter-supported field campaigns were completed in each basin in 2011 (Susitna), 2012 (Nenana), and 2014 (Susitna). Reports summarizing field and analytical data resulting from these campaigns will be published.

Geologic studies in the Susitna basin are directed at understanding the architecture of Cenozoic coal-bearing strata that may serve as both the reservoir rock and microbial gas source to a potential hydrocarbon system, similar to the adjacent producing Cook Inlet basin to the south. A principal goal is detailed characterization of the basin stratigraphy exposed at the surface to help reconstruct the fluvial depositional system and constrain subsurface petrophysical models. A suite of samples collected from each measured stratigraphic section for reservoir quality, seal capacity, thermal maturity, sediment provenance, coal quality, Rock-Eval pyrolysis, and age, provide, for the first time, a comprehensive collection of baseline geologic data for the Cenozoic stratigraphy discontinuously exposed throughout the basin. Additionally, reconnaissance structural studies at selected locations along the basin periphery help to document the type of structures deforming the margin. These observations are supplemented by apatite fission-track and (U-Th)/He analyses of samples collected from Cenozoic strata exposed along the basin margin, helping to link periods of margin uplift and erosion to subsidence and deposition into the Susitna basin.

As in the Susitna basin, geologic studies in the Nenana basin are directed at understanding the architecture of Cenozoic coal-bearing strata that may serve as both reservoir rock and source rock for microbial gas. A principal goal of the study is to understand the origin of the basin, which is currently subsiding along seismically active northeast-southwest-trending transtensional faults. A suite of apatite fission-track and (U-Th)/He samples, collected along a northwest-southeast transect from the Alaska Range to the north end of the Nenana basin, has helped constrain the role of this structural trend in the long-term evolution of the basin. A series of measured stratigraphic sections from widely separated outcrops provide constraints on the nature of nonmarine depositional systems comprising the basin fill and potential source and reservoir rocks.

In addition to the Susitna and Nenana basins, the section has worked in the recent past on the petroleum potential of the Holitna, Minchumina, and Yukon Flats basins. 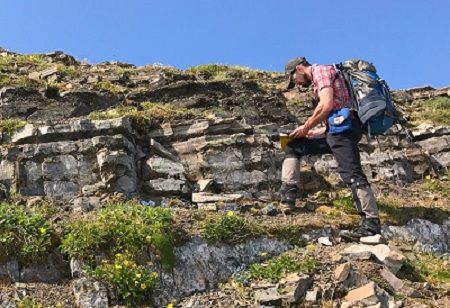